In my post "Why Bees?," I mentioned that the reason we became interested in bees was because my brother-in-law took up beekeeping after a swarm showed up at his house.  It's been about two years (maybe more...time seems to be flying the older I get) since we started learning about beekeeping through him and other sources.

In order to start our own beekeeping adventure, we first did a lot of research.  We talked to my brother-in-law and asked his advice.  My husband also has a few co-workers that keep hives, so he talked to them.  Pinterest is a smorgasbord of information.  And one year I bought my husband the book, The Beekeeper's Bible. This book includes everything from beekeeping history to what to do with all that honey you will hopefully end up with.  It is a great resource.  And my husband has been attending a local county beekeepers' meeting once a month.  I hope to be able to attend the meetings in the near future, but I haven't been ready to leave J much  (Yes, I'm a smother mother.).

After a little over a year of research, planning and budgeting (remember we are Dave Ramsey people), we decided that this spring we would take the plunge.  My husband asked for the bee boxes for Christmas.  I bought them from Mann Lake Ltd.  When deciding what boxes to get, we decided to go with boxes that were already assembled.  Going this route was about 3x as much money, but after talking with a few other beekeepers that bought boxes unassembled and then put the boxes together themselves, we were advised to go this route.  All of the beekeepers we talked to said they would buy the pre-assembled boxes from now on because it is an incredibly time-consuming task to put the boxes and frames together.  My dad always says you pay for things in life with either time or money...we decided to pay with money this time. 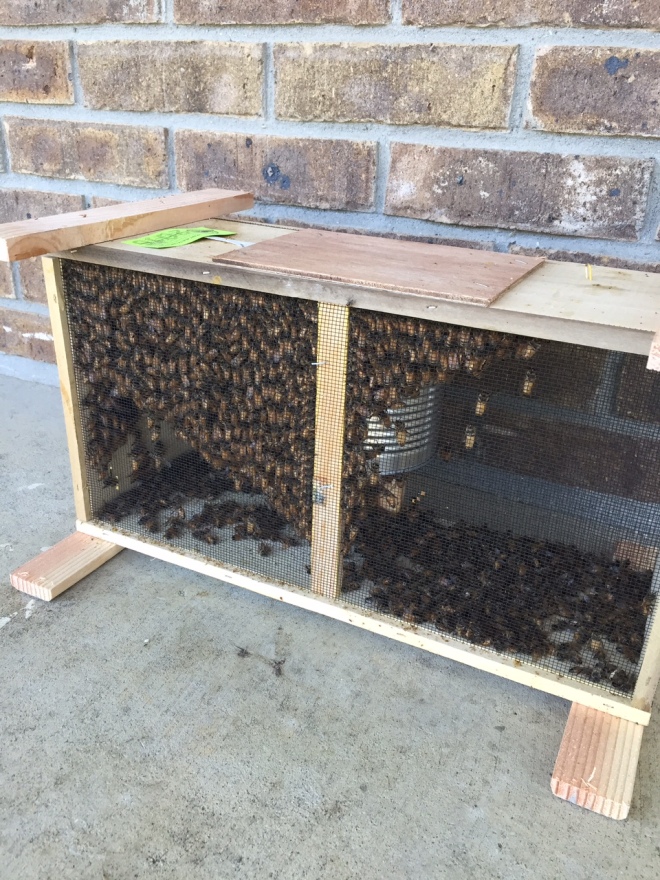 Bees arrive in a 3lb box through the USPS.

Then in February we ordered our bees.  We really should have ordered them in January.  You want to order them early.  If you wait, you may not get any, which is what we were afraid was going to happen to us.  We looked at four to five vendors before finding one that still had bees available for sale for early spring delivery.  We got ours from Mountain Sweet Honey and they were about $130.  We decided to order bees instead of trying to trap a swarm in order to be able to guarantee we would have bees this year.  Trapping a swarm is something we would like to do in the future, but maybe after we get this hive established.  There is no guarantee bees will come your way with the trap.  Also, we bought a three pound box of bees instead of a nuc.  With the box of just bees, we will have to let them build the comb from scratch.  If you buy a nuc box, it comes with frames that already have the comb started so the bees have less work to do.  Nuc boxes are a bit more expensive, but they can also increase the odds of your bees staying put.  The nuc is sort of like a mobile home, the location of the home can change, but its still home.  Because we will have to wait for the bees to create their comb from scratch, we will not be able to collect any honey or wax from them this year.  We will need to leave it for them so that they have enough to feed themselves over the winter.  Bees that come in the nuc box have less to build from scratch so, depending on your hive and location, you may be able to harvest from a hive started with a nuc faster than one started without .  Again, it boils down to time and money...this time we decided to pay with time, but in the future my husband says we may look into nuc boxes.

Adding the frames to the box.

The day our bees arrived, my husband donned his bee suit (I don't have one yet) and got to work setting up the hive.  He dug a little spot and put down cement blocks to ensure that the box would be level and not topple over.  He added the frames and then dumped the bees in.  Yes, I said dumped.  Now, before doing this, you will want to spray the bees with a sugar water mixture.  This helps prevent them from flying because it gets on their wings, but as they clean themselves and each other off, it is also starter food for them.  The queen is in a little box that has a hole plugged with sugar.  My husband placed the queen in the hive box and the bees will eat through the sugar cube to release her.  Then he put the top on the box.  He placed a water pan nearby as well.  Make sure that the bees have something in the water to land on.  You don't want your bees drowning after you spend so much on them!

Spraying the bees with sugar water.

Dumping the bees into the box.

Adding the queen into the hive. She is in the small box in his hand.

Our bees have been set up for a little over a month now. We checked them last week, but they still weren't ready for us to add a box to the hive.  We were told that you should start with only one box.  Only add an additional boxes once the previous box is 80% full.  The reason, we were told, is because the bees may build up into the additional boxes before filling up the first.  Leaving this empty space can leave room for pests and other bugs to come in and possibly hurt your hive.  We also assumed that having boxes that are only half full will affect the amount of honey and wax you can harvest.  These were things that I didn't know until my husband was actually setting the box up the day our bees got here.  I was a little disappointed because I thought all the bee boxes would be out of the office, but not yet!  Soon hopefully! 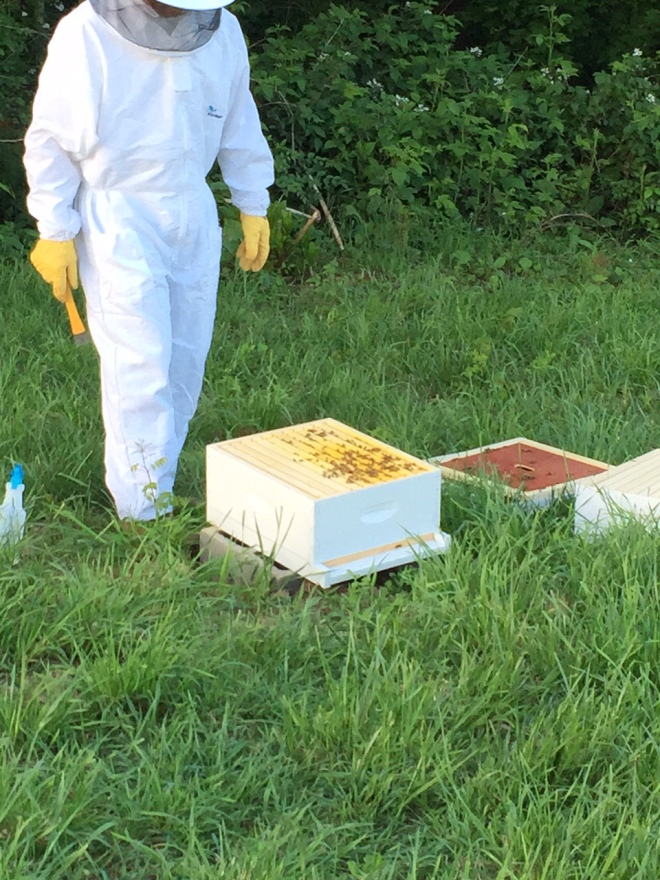 Checking the bees a month later. The dark yellow is where the bees have built the comb.

Stay tuned for more information on our first beehive!

This error message is only visible to WordPress admins