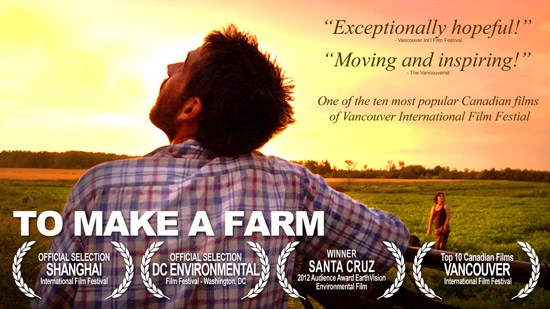 Picture taken from To Make a Farm's homepage

To Make a Farm is a film that follows three farms owned by young people in their first years as farmers with very little agriculture experience.  I enjoyed this film, and actually watched it twice.  I definitely recommend you watch it, as it gives a glimpse into the struggles of farming.  I believe that a part of these young people was naive in their dream of what farming would be, as are many of us, but I also believe that, as a viewer, you feel their victories and pride in growing and producing quality food, which can negate much of the toil.

The farmers featured are what people around here would call "granola."  They believe very much in natural, organic practices.  They give very deep, existential views on what it means to produce food.  The farmer, Wes, actually just builds a small tent-like structure in the woods next to his plot of land and lives there for the season.  Tarrah, is asked how she feels about being called a "back-to-the-lander."  She starts to respond in saying how it is a derogatory term and that she isn't one, but upon giving her explanation of what she believes a "back-to-the-lander" is, she realizes that she would even classify herself as one! 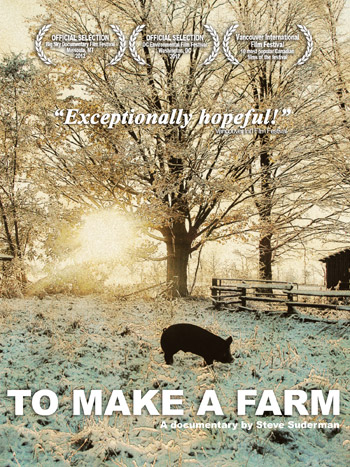 Picture taken from To Make a Farm's media page

Don't let any of this prevent you from watching the film though if you think that you are too traditional in thought.  I think that their views do give us all something to think about.  We all have become removed from our food and how it is produced.  And while I have always been around a farming community, I do think that, even for me at times, I take for granted to beauty in all the God has blessed us with in order to sustain ourselves.  I mean, our garden has boomed this year, and I truly think that its because of our honey bee hive.   Everything works together in this amazing circle of life (yes, insert Lion King song here).

The other reason I think that you should watch this film is because you can feel the melancholy of the Ontario filmmaker Steve Suderman.  He took his family farm for granted until it had to be sold.  I believe that it is important to understand the struggles and work associated with farming naturally and locally so that we can appreciate all that small farms do for the food we eat.  It's not as easy as just not factory farming.  Small farms need community support.  In the book The Dirty Life (read my review here), Kimball talks about how when you complain about organic produce costing so much, blame the weeds.  These local farmers have to weed by hand if they aren't to use chemicals.  That takes a lot of time and work.

Ok, I'll get off of my soapbox.  Let me just say that you will enjoy this film and you should watch it AND support your local agriculture!  Visit your farmers market even if it is small.  The more that farmers see support for local food, the more they will be willing to give it to you.

This error message is only visible to WordPress admins